A postal code is essentially used to organize postal services throughout a nation. Currently, Cambodia has one autonomous municipality and 24 provinces determined by postal codes.
The first two digits denote the province, while the last three numbers denote the post office information. For example, Phnom Penh is Cambodia's capital city: 120806 - - Kouk Khleang Sangkat

As of 1863, Phnom Penh was a small village on the dike between the river and the bloody plain to the west.

After becoming Cambodia's capital, Phnom Penh progressively organises. It had four districts: In the north, the king granted large territories to the Catholic Anna mites. King Norodom established Khmer settlements around the Royal Palace and Wat Ounalom. The Chinese community inhabited the first residential buildings in the Center. The French Concession was located between Wat Phnom and the Tonle Sap.

Phnom Penh became a modern city in 1890, when superior resident Hyun de Verneville arrived. De Verneville initiated the first large-scale urban and earthwork initiatives, making the capital a more attractive and healthier place to live. Recognizing the need to expand the city's western edge, de Verneville directed the construction of a semi-circular canal around the French area, and utilised the dirt to fill in the "beungs" (small water channels). By 1899, the canals' southern sides had bridges. De Verneville also ordered additional roads, the Grand Due enlargement, and dock development. He restores Wat Phnom Penh and opens Norodom Boulervard, a connection between Cambodian and European areas. He also ordered hundreds of residences and municipal buildings like the Post Office and Police Station.

The villas and public buildings in the French districts are influenced by Greek and Roman architecture, Italian Renaissance palaces, and French coastal stations. The French neighbourhood is a paradigm of contemporary urbanism, with geometric and cobblestone streets, trees, gardens, and buildings.

The plaza is in the French administrative area, which houses the Bank of Indochina, the city hall, the Treasury, the Police Commissariat, Hotel Manolis and Grand Hotel, and the tax and Excise Department.

A lawn in front of the Post Office was replaced by a plaza in the 1930s, and the building's two wings were expanded north and south.

A central squat tower with a cupola top was removed in the 1940s and replaced with an odd array of loud speakers. The Post Office was remodelled in the 1950s and 1960s. In 1991, each wing received a new floor in the original design. From then on, the structure is two-story, with storage on the bottom level and administrative offices on the top.

What is Cambodia address format?

What is Cambodia Zipcode Format? 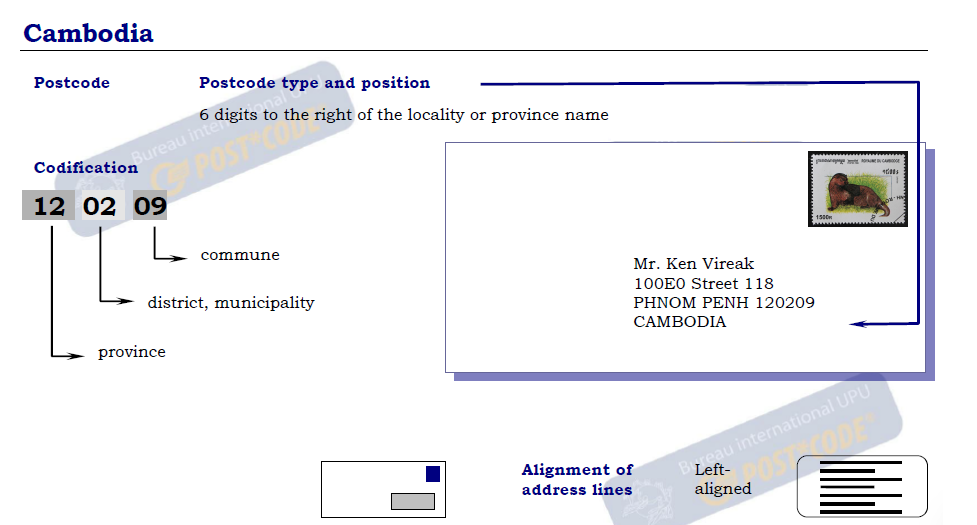