Since 1941, Austria has used a postal code system. Postal codes were first used in the German Reich: 12a for the Reichsgau Eastern Alps and the Danube (Vienna, Lower Danube, Styria) and 12b for the Alps and Reichsgau Danube West (Carinthia, Salzburg, Tyrol, Vorarlberg).

On January 1, 1966, the General Directorate of Post and Telegraph Administration in Vienna introduced a four-digit ZIP code for the first time in Austria, a ZIP code that is still in use today. In each case, the area is represented by the first digit of the postal code (also called routing area). The number "one" is associated with Vienna, "two" with the east and south of Lower Austria and northern Burgenland, "three" with the west of Lower Austria and southeastern Upper Austria, and "four" with Upper Austria and the western area of Lower Austria. "five" represents Salzburg, and "six" represents a part of Western, the Upper Austria which includes a part of Tyrol and Vorarlberg North, "seven" represents  Burgenlan and Styria and "eight" defines southern Burgenland while "nine" defines Carinthia and East Tyrol.

There are, of course, exceptions, particularly at the borders of federal states.
The second number denotes the ZIP code region or territory. The third digit defines the tracking of letters in vehicles and railways. The fourth digit stands for Post Office Concrete. In this way, each post office in Austria has its unique ZIP code.

In addition, There are around 400 different ZIP codes that specify distribution locations, mailboxes, and significant customers. For example, postal number 1000 denotes the distribution centre in Vienna, whereas ZIP code 4005 denotes the foreign Linz location. The wholesale industry has its own ZIP code, such as 1136 for ORF Vienna or 80120 Graz for Neckermann freight. The Austrian Crusher Post is related to the 1008 ZIP code. Letters that include this digit key will be destroyed.

What is Austria address format?

What is Austria Zipcode Format? 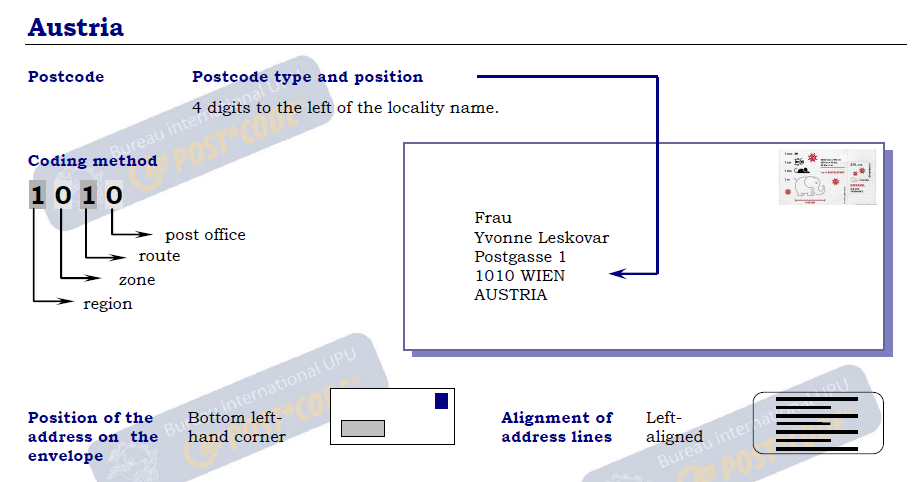